meeting the modest kings and queens of the forest

It has been my dream for a long time to see the four great carnivores that we have here in Finland: the bear, Ursus arctos; the wolf, Canis lupus; the lynx, Lynx lynx; and the wolverine, Gulo gulo. Well, I have seen them all in zoos, but my dream has been to see them in their natural habitat. Being a photographer, a part of that dream has also been to manage to photograph them, but naturally just seeing them would be more than enough.

There is a cost to going around chasing these magnificent animals in their natural habitats, though, since it most certainly means disturbing them. It seems to me that there is already enough disturbance for them on this side of the border (a lot of these carnivores come to Finland over the Russian border, where populations are stronger), so I haven’t done much about this dream. In addition, research done here in Finland has shown that bears notice humans long before humans notice them, and when the human has been noticed, the bear calmly shambles away before it’s seen. The chance of seeing one of these silent giants is thus very low. So when I got the chance to go on a bear safari last autumn, I didn’t say no!

There are several companies in Finland, most of them close to the Russian border, that offer these bear safaris. I travelled to Kuhmo with some fellow biology students to take part in one. These “safaris” usually consist of spending an evening and a night in a hut built especially for photographing without being seen. Baits (such as fish or meat) are put out earlier in the day by the organizers; this bait then usually attracts bears and/or wolves, and a lot of crows. This is done far from human habitation to refrain from making the bears accustomed to humans and thus to avoid conflict between people and these great mammals. I felt more at ease in terms of the intent of the people who organized the safari (who were locals, as they usually are) when we were told that we couldn’t go to an area where one sometimes can see wolverines because it was the time of the bear hunt, that area wasn’t protected and bears are also attracted to those places if baits are put out.

The experience in that little hut was unforgettable – not only seeing these great animals close by, noticing clear differences in their personalities, nor the visit of a white wolf (the first wolf I’ve seen in the wild – and it’s white!). The most memorable part was when it got late, and the outside world grew so dark that we couldn’t see anything anymore; when we crept into our sleeping bags on the mattress-covered floor of the hut and fell asleep to the sound of bears walking around in the bog outside… Splosh, splosh, splosh…

The first wildlife to arrive were the crows – lots and lots of them! All around us, trees like these were filled with them. They were beautiful in the evening light.

After a while we thought we saw something move among the trees – but surely that was just our minds playing tricks on us! It turned out not to be – the first bear arrived like a shadow out of the forest. That same individual had quite a while to eat before the next one turned up – it was also the last bear to leave. It must’ve been really hungry… 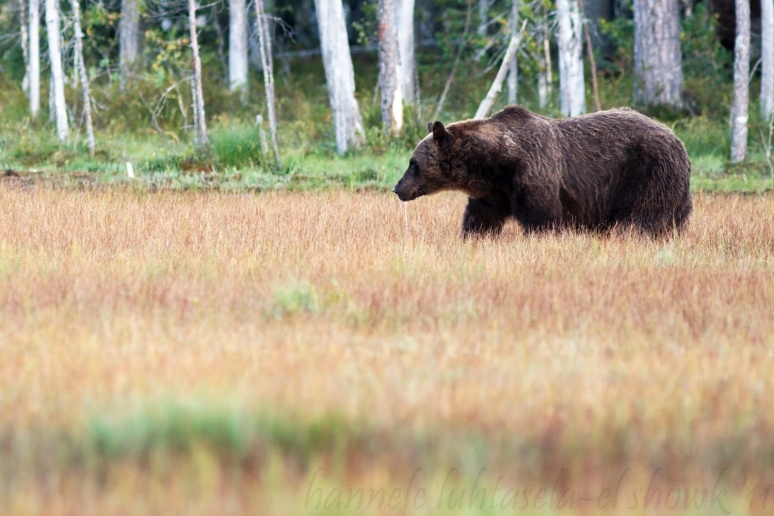 There were two separate places where baits had been put out. After an hour or so at one of the feeding places and after being joined by two other bears, the first bear started walking towards the next feeding ground. On the way it took a couple of breaks to drink – if you have a closer look at the picture, you can see water dripping from its mouth.

It was already getting dark when the bears started arriving, so taking pictures wasn’t trivial. Sometimes, though, it almost felt as if they stopped to pose. Maybe this one heard something from one of the huts – the position of its ears shows that it’s keenly listening. What struck me several times during that evening and night in the hut was how calmly and softly they moved. Such big animals, and such grace. It made me realize that even if they’re big and look clumsy, in their domain, we’re the clumsy and noisy ones.

Then all of a sudden something happened that we had only dared to dream of – a wolf appeared! It ran along the forest’s edge, stopped briefly to look at the bears and then ran off again. It was just a brief encounter with that white, beautiful social animal – but a moment I won’t forget. We did a quiet high-five in the hut and the huge smiles on our faces didn’t seem to fade that night.

I’m not sure how many bears we saw that night, since apart from that first bear that didn’t leave until morning, the bears came and went. Some seemed to just walk through the scene and have a bite while they were at it; some sat down and settled to have their evening meal (like the one in the picture); whereas one cautiously walked towards the food, grabbed a piece and ran (yes, ran) into the forest to eat, only to come back in a while. There was no pursuit by any other bears, so we started calling that individual the shy one.

We fell asleep to the sound of the bears walking on the bog, hoping that there would still be someone there in the morning. The sun greeted us at 5, but no bears or wolves were to be seen, only a heavy mist in a landscape that in my eyes just begged for a bear to show up and pose one last time. We had no such luck.

But there’s no use in despairing; there were still crows to keep us company, and a golden light that spread over the damp grass as the sun rose higher and higher in the sky. The spiders also seemed to have had a good night. For me, it had been an incredible experience that we kept talking about during the whole 8-hour long car ride back home. Sometimes when I fall asleep I can still hear that strangely soothing sound of bears walking around, paying no attention to the weird creatures inside their boxes… I’ll leave you with these pictures of the golden morning light and the dew caught in spider webs: