ant logi(sti)cs – what happens when an ant colony decides to move?

Last night, me and my partner arrived at my parents-in-law’s farm in Morocco. The weather is wonderful and the food terrific – it’s always a treat being here! After we woke up to the call of the rooster, we put our boots on and went for a walk. It’s great going out here because there’s so much life! I’m especially fond of the insect life; compared to Finland, there is an incredible richness of species. It almost makes me dizzy, in a very happy way!

Some of my favourite insects are of course ants (they were my experimental organisms for my master’s project). Walking around on the farm, you can see them basically everywhere, doing what ants do – collecting food, cleaning the nest entrance, defending the nest. What we got to see this morning was another one of those things that ants do, but not every day: they were moving. Moving to a new place is no small feat when it comes to ants: after they’ve found a new place that suits them, they have to move all their stuff there, too, not just themselves. That stuff is the young of the colony: eggs, larvae, pupae and newly eclosed (hatched) individuals, both workers, queens and males.

I want to give some very short background on ants and their biology, since it might help you understand the effort it takes and the dangers they face when they decide to move. Ant colonies consist of one or a few queens, who are the reproducing females in the colony, and workers, who are also female but don’t reproduce. Instead, the workers do everything else in the colony. Always when you see ants running around, they’re female. Occasionally, there are also males, but they usually live only for a few weeks: they’re born, they mate, and die almost instantly after mating.

The size of the colony can range from tens of individuals to millions. A queen mates only at one time during her lifetime (possibly with more than one male) and stores the sperm from that mating for the rest of her life. She can live up to 30 years, and continues using the sperm acquired during that one mating flight to fertilize all the eggs she lays during her whole life. Most of her offspring are workers who build the colony, maintain it, defend it from invaders, take care of the developing young (from egg to larva to pupa and finally an eclosed adult), collect food and feed the queen. During a move, it’s of course these individuals who make it happen and usually also carry the queen to the new nest. The young are carried one by one in the workers’ jaws.

Moving is a risky business for ants. Ant larvae and pupae are full of nutrition and lack jaws or stings and are thus the favourite food for many animals. Transporting them from one nest to another means that they have to be taken from the dark and safe depths of the nest up to the surface during daytime.  This, of course, is literally bringing otherwise difficult-to-get, nutrient-rich food into broad daylight.

So why do they do it? There are many reasons, but in the end, it’s because the old nest has become unsuitable in some way: maybe it’s too dry or too small or maybe it’s infested with some parasite (like a fungus). There’s no way of knowing why this particular colony decided to move, but since it’s not an everyday activity, I decided to take some pictures of the event (I have to say here that it was actually my partner who first saw this happening and pointed it out to me – and even though he’s a great photographer himself, he let me do the photographing). You can see some of the photos here. I hope you enjoy them – also, if you have any questions or comments, feel free to ask or comment!

This ant is carrying a pupa. 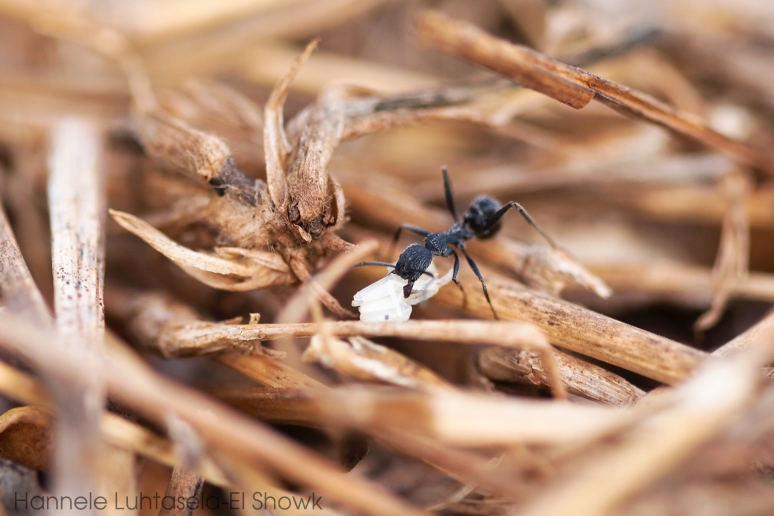 You can already see that the eye of the pupa is darker than the rest of the ant – as the ant ages, its exoskeleton melanises and becomes dark.

Someone also has to guard the situation and defend the workers carrying the young, if needed. Ants are very efficient at division of labour: during a move, some do the carrying and some do the guarding. 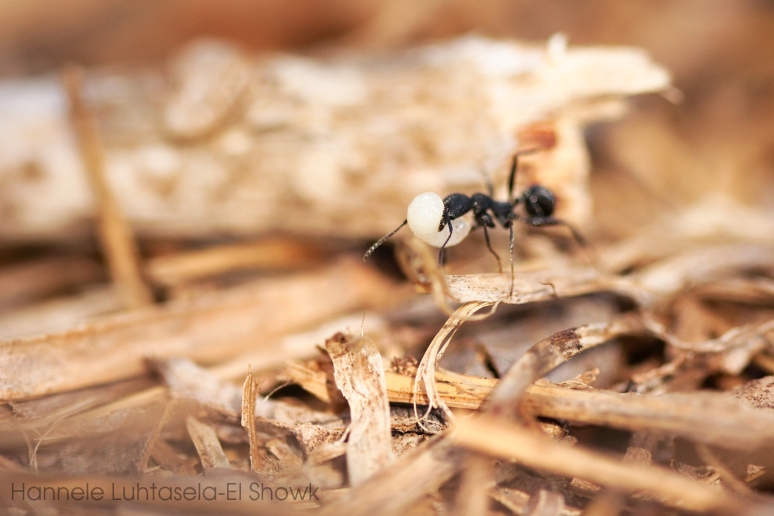 This worker is gently carrying a larva in its jaws. It’s quite interesting to think how a bag of liquid (the larva) will be a fully capable worker after a few weeks.

It was interesting to watch the ants climb over obstacles several times higher than themselves, while carrying a load that sometimes weighed almost as much as themselves. Here’s another worker with a pupa.

Unfortunately, I didn’t manage to get a good picture of a worker carrying eggs… But if you use your imagination, maybe you can see that this worker does have a bunch of eggs in its jaws. It’s fortunate that they stick together; moving all the eggs one by one would probably take a huge amount of time… 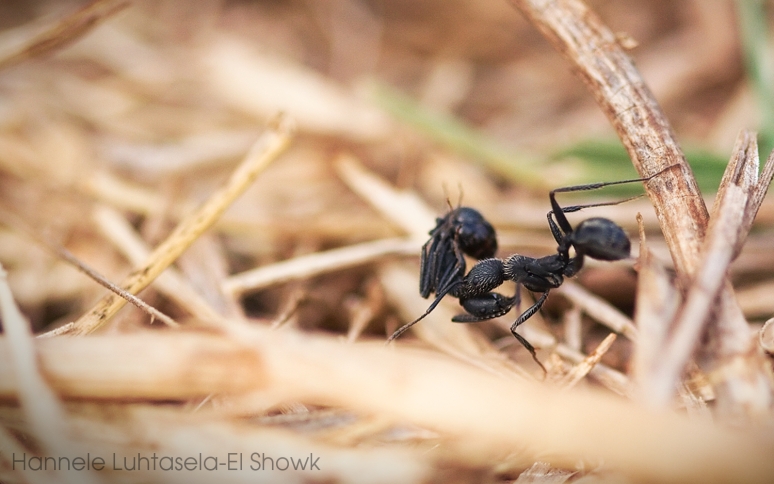 This worker seems to be carrying another adult ant. The workers don’t usually carry other workers to the new nest, but the individual being carried also doesn’t look like a male or a queen. If you look closely, though, you can see that the ants look quite different – one has much more hair than the other, for instance. This might mean that the ant is actually dead and is moved because it’s part of the colony’s food storage. Some ant species also enslave other ants, but during a move, those slaves would probably walk by themselves to the new nest. I don’t know exactly what’s happening here, but there were many of these adult ants being carried to the new nest. I’m happy to hear suggestions!

[EDIT: I was wrong – apparently worker ants do often carry other workers to the new nest, because it’s energetically less costly for an ant to carry another than for two ants to walk separately! Alex Wild kindly directed me to the wonderful book The Ants, where this behaviour is explained… You learn something new every day!]

40 thoughts on “ant logi(sti)cs – what happens when an ant colony decides to move?”